Tottenham were dumped out of the Europa League as Mislav Orsic’s stunning hat-trick sealed a remarkable 3-0 win for Dinamo Zagreb to heap pressure on Jose Mourinho.

Spurs held a 2-0 aggregate advantage ahead of the second leg in Croatia thanks to Harry Kane’s brace last week, but they suffered a spectacular collapse against a side whose coach, Zoran Mamic, resigned on Monday after he was sentenced to four years and eight months in prison for fraud.

Orsic’s first came shortly after the hour mark courtesy of a fine strike from outside the penalty area and the Croatia international forced extra time with a cool finish in the 82nd minute.

His best was yet to come, though, the striker scoring a glorious solo goal after 106 minutes to seal Dinamo’s progression to the quarter-finals and leave Mourinho with some tough questions to answer.

Our Europa League campaign comes to an end.

The opening period offered no indication of the drama that was to come, with Dinamo’s best chance falling to Lovro Majer in the 35th minute as he dragged narrowly wide of Hugo Lloris’ right-hand post after the ball had fallen kindly for him inside the penalty area.

Tottenham struggled to get going and had to wait until a minute before the interval for their first attempt on target, Dominik Livakovic denying Kane after a fluid move involving Lucas Moura and Dele Alli.

Spurs scarcely improved after the break and deservedly fell behind after 62 minutes when Orsic cut in from the left and curled a superb strike into the top-right corner from 20 yards.

Orsic struck again with eight minutes remaining, stealing in unmarked to slot home Iyayi Atiemwen’s low cross from 12 yards, although only a smart stop from Livakovic denied Kane grabbing an aggregate winner for Spurs shortly after.

The final twist in the tale came when Orsic swept past three Tottenham players before curling beyond Lloris’ reach from outside the penalty area a minute into the second half of extra time.

Kane came close to rescuing his side inside the final five minutes but it would have been undeserved as Dinamo left Spurs’ hopes of European glory in ruin.

What does it mean? Pressure mounts on Mourinho

Scrutiny will increase on Mourinho after this most humiliating of defeats. Few gave Dinamo any chance of progressing to the last eight after Spurs’ dominant win in London, but they got the better of their more illustrious opponents with a display brimming with hunger and skill.

This is the first time an English has taken a two-goal advantage into the second leg of a European tie and ended up being knocked out since Manchester City did so against Monaco in the last 16 of the 2016-17 Champions League.

1 – Tottenham are the first English side to take a two goal lead into the second leg of a European knockout tie and fail to progress since Manchester City against Monaco in the last 16 of the 2016-17 UEFA Champions League. Stunned. #UEL pic.twitter.com/rdWw3vJO8R

It is not often Kane is overshadowed in the finishing stakes, but Orsic put on a clinic for the England captain. He became the first player to score a hat-trick for Dinamo against an English side in major European competition, while he is also just the second player to score a treble against Spurs in Europe after Serge Gnabry’s four-goal haul in last season’s Champions League.

Nobody epitomised the dismal nature of Tottenham’s display quite like Alli, who made just his 11th start of the season across all competitions. He failed to have a single shot, won just one of his six duels and lost possession on 11 occasions before he was brought off for Giovani Lo Celso after 68 minutes.

– Dinamo Zagreb have progressed from each of their last three knockout ties in major European competition in which they lost the first leg (also versus Ajax in 2007-08 and Viktoria Plzen in 2018-19).

– This is the third time Jose Mourinho has lost a match in European competition by a three-goal margin, with two of those coming with Spurs (also versuss RB Leipzig in March 2020) and another with Real Madrid (versuss Borussia Dortmund in April 2013).

– Dinamo registered their third victory at home to an English side in European competition, following wins against Arsenal in September 2015 (Champions League) and Leeds United in August 1967 (Inter-Cities Fairs Cup).

– Tottenham have failed to keep a clean sheet in 13 of their last 14 away games in the Europa League, including conceding in all five such games under Mourinho.

Tottenham will hope to bounce back when they visit Aston Villa in the Premier League on Sunday. Dinamo, meanwhile, host HNK Gorica in the Croatian top flight on the same day. 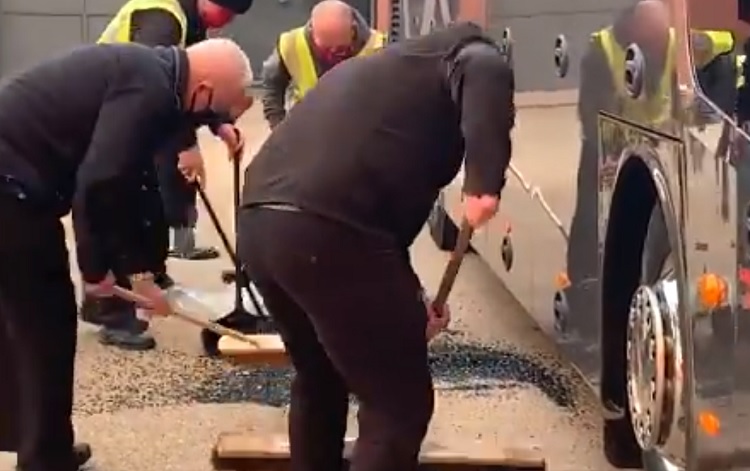