Liverpool took charge of their Champions League last-16 tie with RB Leipzig as they claimed a 2-0 win in the first leg in Budapest.

Julian Nagelsmann’s side, who pipped Manchester United to a place in the knockouts, looked far from comfortable in the unfamiliar surroundings of the Puskas Arena, where Tuesday’s game was held to due to coronavirus travel restrictions.

Mohamed Salah’s 24th goal of the season put Liverpool ahead after a mistake by Marcel Sabitzer, and Sadio Mane doubled the advantage when Nordi Mukiele gifted him an opportunity.

The Reds are now unbeaten in six away games against Bundesliga opposition stretching back to 2002, and Jurgen Klopp’s men will be firm favourites to progress to the quarter-finals.

Liverpool nearly fell behind after just five minutes, Dani Olmo’s diving header hitting the inside of the post from Angelino’s cross.

The away side looked the most threatening as they began to take control, and Peter Gulacsi was alert to block a Salah effort from close range before Roberto Firmino fired a shot into the side-netting.

Mane then headed over from six yards from a Firmino cross, and the Senegalese thought he had set up his strike partner to nod in the opener after errors from Dayot Upamecano, but the ball had gone out of play.

Christopher Nkunku had barely been involved in the first half but he could have given Leipzig the lead early in the second, Alisson saving well after the striker ran onto Olmo’s throughball.

It was Salah who broke the deadlock 53 minutes in, drilling past Gulacsi after a dreadful backpass from Sabitzer, and it soon got worse for Leipzig.

Mukiele made a complete mess of a simple clearance forward by Curtis Jones, and Mane had time to stride into the box and slot home.

Angelino had a chance to pull a goal back but sliced his attempt badly, summing up a poor game for last season’s semi-finalists.

20 – Sadio Mané has scored 20 goals in all European competitions for Liverpool, becoming only the fifth player in the club’s history to reach that total. Famous. pic.twitter.com/lPwcaQ2zo0

What does it mean? Fragile Liverpool give season huge boost

Injuries and recent form – they had won three of their previous 12 games in all competitions – will have had Liverpool fans feeling a little anxious before meeting the side second in the Bundesliga.

However, a display of supreme authority, helped by an erratic approach from Leipzig, put Klopp’s men in total charge of this tie and could well have provided a timely boost in confidence.

Leipzig will hope for better in the second leg, but their previous visit to England ended in a 5-0 defeat to Manchester United.

Salah should perhaps have scored sooner but he made no mistake with his clearest chance of the game.

He spent the rest of the game harassing a deeply unsettled Leipzig defence in a hugely impressive, committed performance.

Nagelsmann’s men in a muddle

Leipzig were on a six-game unbeaten run at home in this competition and it was unfortunate for them that this game had to be relocated to a neutral venue.

Still, that does not explain the horribly haphazard nature of their performance. Two defensive errors led directly to the goals, Mukiele could have been sent off before his mistake, while Bayern Munich-bound Upamecano misplaced 20 passes from centre-back.

With the return leg not until March 10, Liverpool’s more pressing concern is a derby with Everton on Saturday. Leipzig head to Hertha Berlin in the Bundesliga a day later. 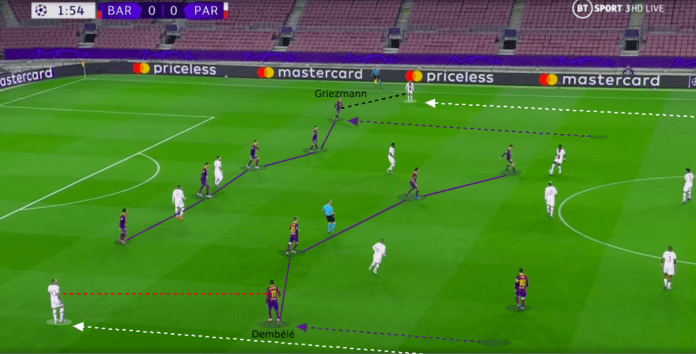 Tactical analysis: How Paris Saint-Germain blew Barcelona away at the Camp Nou | Sportslens.com