It was indeed a game of roster rotation as Vlatko Andonovski rolled out his starting lineup against Argentina. Jane Campbell, Kelley O’Hara, and Tierna Davidson all got their first minutes, while Casey Krueger and Kristie Mewis got their first starts. There was also some tinkering with the forward line as Lynn Williams finally got some rest and Andonovski shifted Press to the right side.

Right away the team looked much more fluid and mobile, although it can’t be discounted that they were facing a more tired, slower Argentina team at the end of the tournament. The US looked often for the direct ball over the back line or the wide play, staying away from Argentina’s attempts to compact the middle. Early on, there was an attempt by Argentina at defending in an orderly 4-2-4, facing up in compact lines particularly when Julie Ertz had the ball at feet and was looking to distribute. That fell off a bit as the US began to systematically, repeatedly tear the Argentina backline to shreds.

Without Lynn Williams in the mix, it was mostly Rose Lavelle who was pulling the game wide on the right, with some crossing from Kelley O’Hara. O’Hara had a planned 30 minutes in the game before getting subbed out in the 32’ for Emily Sonnett.

On the left, Casey Krueger had a very good first half, maintaining the high press while picking out Megan Rapinoe and Kristie Mewis in pockets. Rapinoe had the first goal in the 16’. Lavelle own the ball back in midfield and popped it over the back line. It was a nice enough service that Rapinoe didn’t even need to touch it, just got behind it and finished it nicely.

The second goal was in the 26’, once again Rapinoe. Christen Press drifted out of her lane to check back and pick up a ball, then turned and cleverly threaded it for Carli Lloyd. Lloyd did the smart thing and dropped it off for Rapinoe to finish. Then Lloyd got her own goal in the 35’, this time finishing off her own quick little pass from Mewis, who did a good job in the first half with her dynamic runs and late timing into the box.

The fourth goal was in the 41’, this one for Mewis herself. The Krueger – Mewis connection paid off again as poor Argentina’s back line got cooked by yet another player making the turn and facing up to goal.

The second half started with a triple sub, as Lavelle, Lloyd, and Krueger came off for Lindsey Horan, Alex Morgan, and Midge Purce. Horan’s presence shifted Mewis to the right side of midfield, while Morgan went in as the 9 and Purce filled in at RB. The chance creation slowed down a little bit with the change. The US still alternated between trying to drop the ball right over the back line, this time for Morgan to peel off her defender(s) with speed, and pulling wide to create chances with crosses. Purce was effective here again, winning a lot of 1-v-1s and sometimes managing to cook two players in a row.

Argentina pushed back a little bit in the middle of the half, surging with some lovely possession ball while switching the point of attack and trying to lure in the US, but the defense was on it and snuffed out attempts to play in their forwards. Davidson looked solid here, working well with Sauerbrunn, tracking players as well as distributing out of the back.

The US made another two subs in the 62’ with Ertz and Rapinoe coming out, and Jaelin Howell and Sophia Smith coming in. Press was able to come left and Howell went in at DM, immediately bringing strong physical energy. Press continued to work well tucking into the halfspace to play quick one- and two-touch passing up the left and rotate into crossing and scoring positions.

In the 77’ Mewis delivered a lovely cross that suckered the goalkeeper out; she whiffed it, but Morgan couldn’t quite finish it at the back post. Morgan got her goal eventually, though. Sophia Smith picked up the ball deep in midfield, ate up the space, drew in several players, and was able to feed an open Morgan sitting on the back line. Morgan turned and was gone, finishing the ball to make it 5-0.

The last goal was in the 88’ Mewis served in a corner. Horan’s header got sent back across goal face, where Press was in good position to finish the second ball and make it 6-0, which was the score at full time.

After the game, Andonovski said he was happy with the performance.

“Even though they’re tired or we’re a better team, it’s always hard to play against the team that sits low,” he said. “It’s hard to break them down. And it’s hard to do it quick. So for us, it takes a little bit of time to figure out the angles, to figure out the area, to figure out the positions in how we can do it. So that was the one thing that we’re looking at, like, how quick can we do it? Who can figure that out and how we can unlock a team. So the the understanding of our principles, the implementation of our principles, and the execution individually as a group as a unit, and also as a team is what we’re looking for.”

He also had praise for two of the defenders he gave starts for the first time this tournament in Casey Krueger and Tierna Davidson. “Early on [Krueger] had a couple of decisions that she made that I felt like she could have done a better job. But again, it was very early in the game. And once she started feeling the game and understanding the movement of the players ahead of her, I thought that she was very good. And on the other side defensively, there was nothing we can say. I mean, she was spot on in every action that she performed. On the other side, or next to her, Tierna, very calm, dictating the pace together with Becky and spraying balls left and right, I thought she did good.” Andonovski said that Krueger was a planned sub after 45 minutes, based on where she’s currently at in her fitness and recovery.

When asked about his players rotating well through space, Andonovski said, “We work lots of different rotations, interchanging of positions. We work on players making different runs in different movements. And what we always say is, we give them tools, and they need to use them in different times in different ways.”

That’s certainly what we got out of the team tonight. Once again, it’s important to remember this was against a tired team just getting their legs back under them after over a year out of the international game. But let’s not completely discount that this was a positive ending after two games where they struggled to execute, particularly given the player rotation, namely resting Crystal Dunn and Lynn Williams. It was a glimpse of what he clearly wants this team to be, with versatile players able to move quickly and creatively in and out of passing channels. There’s a couple of FIFA windows upcoming that are probably going to be further opportunities to winnow this roster to 18 and get everyone back from the NWSL clubs fitter and sharper. With everyone back in game shape, that should be a really fun, really watchable, really dangerous Olympic team. Now the Olympics just have to actually happen. 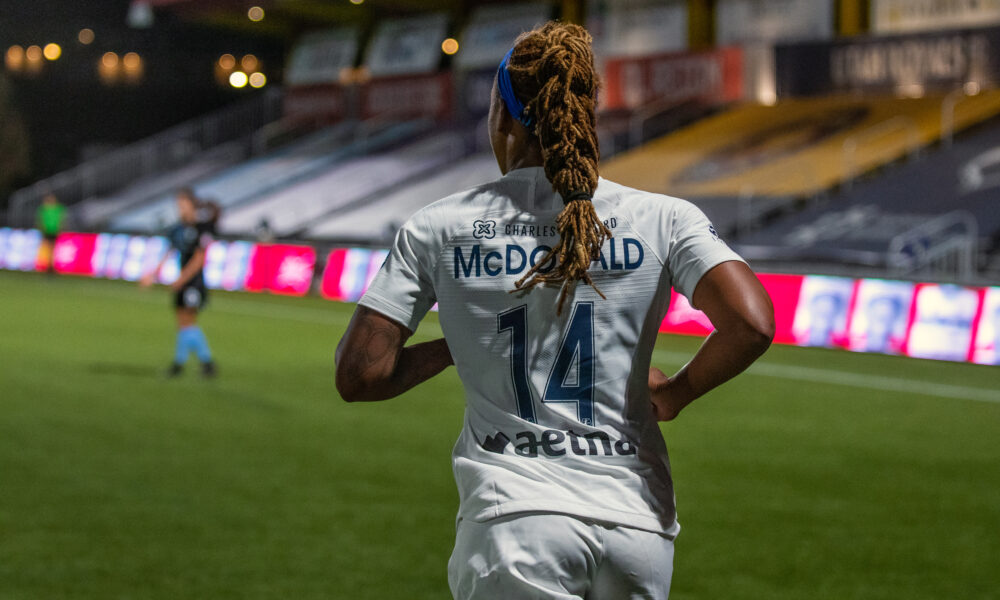