27 September 1999. That was the last time Everton had beaten Liverpool at Anfield. An early Kevin Campbell goal was all they needed then, as three players were sent off in a typically hot-headed Merseyside derby.

The Toffees failed to repeat the trick for 21 years. However, going into this match, Liverpool had lost three straight Premier League matches and their unbeaten home record was in tatters as Burnley, Brighton & Hove Albion, and Manchester City won the last three games at Anfield. With Everton just three points of their Red rivals, this was undoubtedly their best shot at ending their torrid Anfield record.

They did just that, with a goal each in the first and last 10 minutes of the match sealing a hard-fought 2-0 victory. In this analysis, we will take a look at Carlo Ancelotti’s tactical tweaks that helped Everton get this all-important win.

Looking at the line-ups, one would expect Everton to have a back-five or send Lucas Digne forward to preserve a back-four. They did neither, as Séamus Coleman alternated between midfield and defence on the right, meaning that Everton switched between a back-four and five quite often throughout the match. 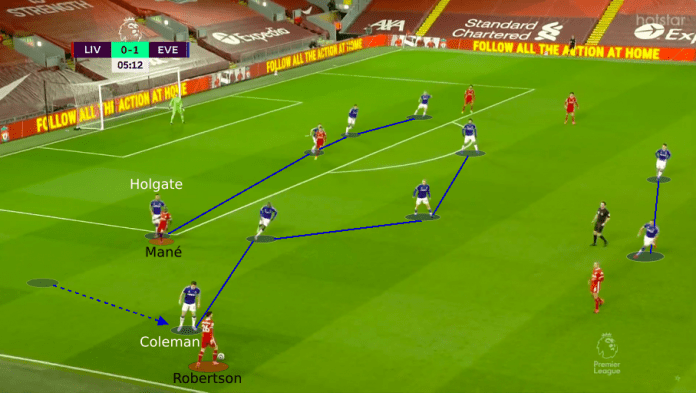 In essence, Coleman was tasked with man-marking Andy Robertson, while Mason Holgate took care of the Liverpool left winger, Sadio Mané. Therefore, Coleman often pushed into the midfield line to meet Robertson, creating a 4-4-2 in defence for Everton. 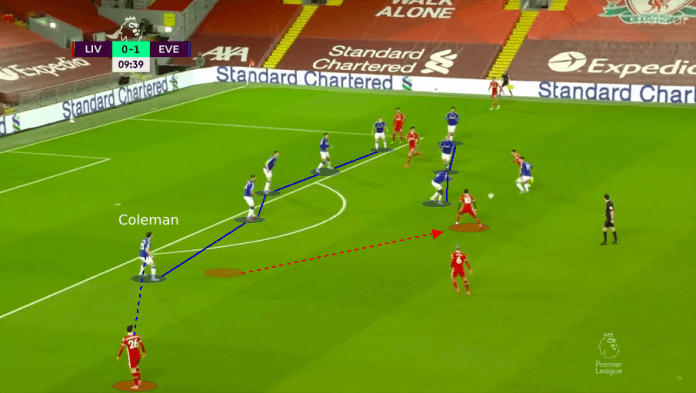 But, in most cases, Mané tucked inside for Liverpool. Holgate did not go with him, but this movement did vacate space for Robertson to push forward. Therefore, Coleman stayed back in a five to deal with the Scottish full-back. 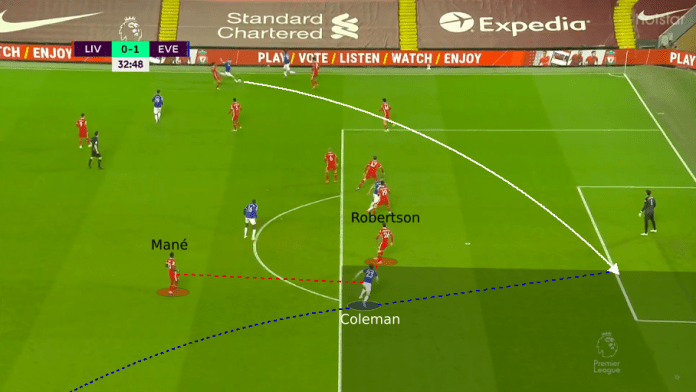 Since Holgate was worrying about Mané, Coleman could also get forward in attack. He did not operate as a traditional right winger but did make late runs into the box from time to time, as you can see here. This enabled him to get past Robertson with ease, as he had greater momentum and came from the Liverpool man’s blindside.

In this way, Ancelotti used Coleman to completely nullify Liverpool’s threat on their left, even countering them, as 39% of Everton’s attacks came from their right.

James Rodríguez did not have to track Robertson in defence since Coleman was doing so, meaning that the Colombian international could solely focus on his main task of creation. 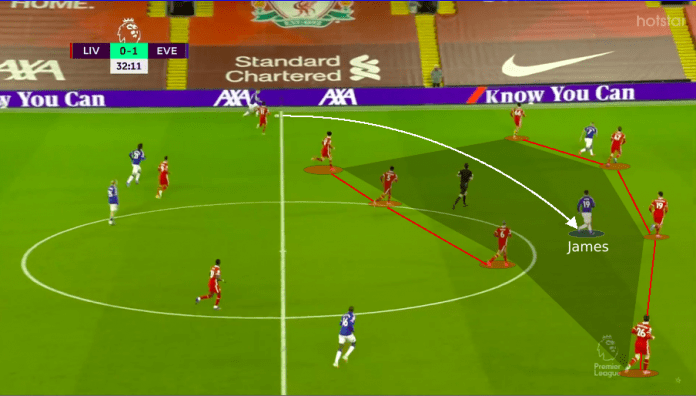 His advanced position enabled him to constantly find and operate in pockets of space between the Liverpool lines, as he is doing here.

James did something similar for the opener too. 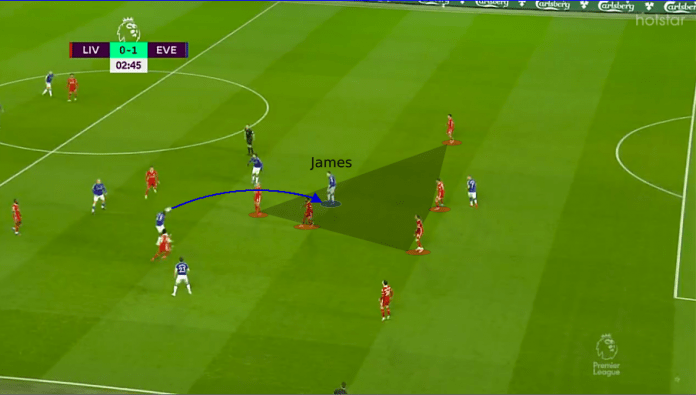 Once again, he found a sweet pocket of space between the Liverpool lines where he could receive the ball. 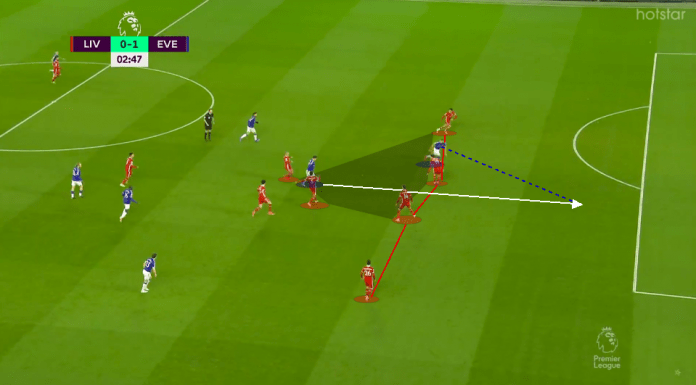 From such a position, it was just too easy for him to spin on the half-turn and look for a through ball in behind the defence. In this case, Richarlison was targeting the new-boy Ozan Kabak, who received little help from Trent Alexander-Arnold, so the Brazilian forward was able to latch onto the pass and slot home calmly.

In this way, James’ lack of defensive duties and resultant attacking freedom turned the tide in Everton’s favour.

Liverpool came out looking a lot more potent and purposeful in the second half, pinning Everton in their own defensive third for long spells. At such times, the Toffees needed an outlet up top, but James was, of course, no good in the air, and Richarlison alone could not take on the entirety of the Liverpool back line.

Therefore, Ancelotti brought Dominic Calvert-Lewin on for James in the 62nd minute in his last game-changing decision. 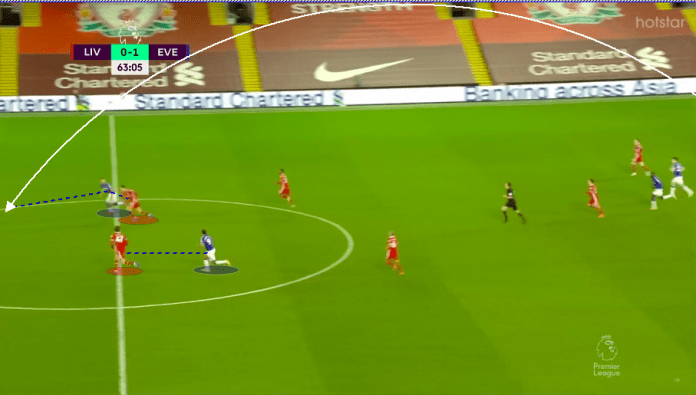 Now, the Everton front-two could target one centre-back each. The Liverpool pairing was not too solid either – Kabak was making his home debut, while Phillips came on for the injured Henderson in the first half, partnering the new Turkish signing for the first time. So, they were relatively soft targets, especially for a physical duo like Richarlison and Calvert-Lewin. 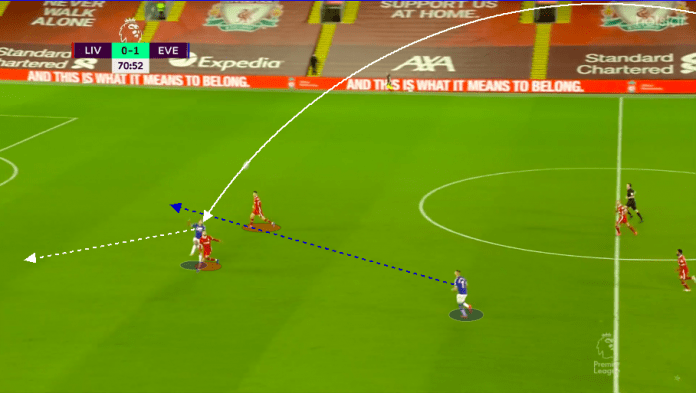 As Liverpool pushed further for an equaliser, such 2v2 situations started becoming more and more common, underlining Everton’s attacking threat. Calvert-Lewin was quite simply bossing the centre-backs in the air, so these situations were very dangerous from the Reds’ perspective.

The pair combined for the penalty leading to Everton’s second as well. 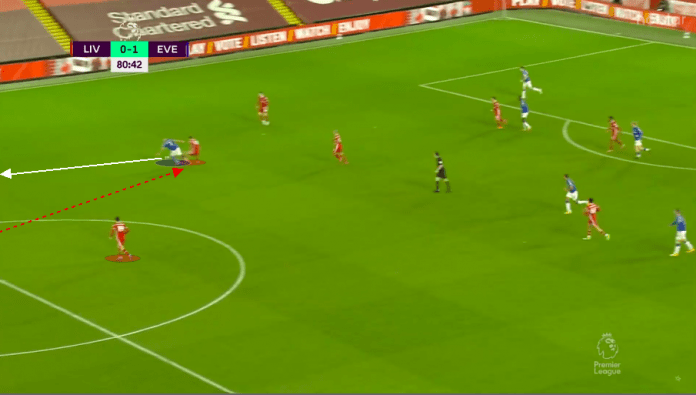 It all started with Phillips rashly committing to a challenge on Richarlison, allowing the Brazilian forward to spin away from him with ease. Now, Liverpool only had Kabak behind the ball. 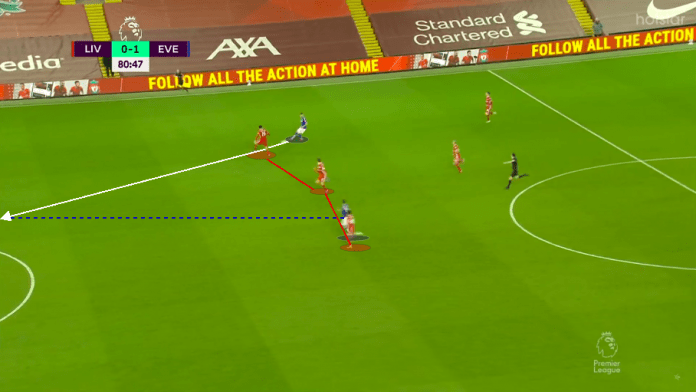 Although both Phillips and Alexander-Arnold attempt to track Calvert-Lewin’s run, neither could stop him from getting in between them. Kabak did not do too well against Richarlison either, as he allowed the ex-Watford man to feed a pass into his strike-partner through his legs. The penalty call itself was contentious, but from Liverpool’s perspective, the situation was undoubtedly avoidable.

Everton had to keep defending resolutely in the second half, but this new front-two gave them some much-needed attacking potency, not only keeping Liverpool’s defence on their toes but also giving their own back line some rest. This is what ended up settling the game.

Ancelotti got his tactical decisions spot on, leaving Jürgen Klopp unable to react. The Italian manager’s usage of Coleman to take Robertson out of the game was an absolute masterstroke, as it also helped James’ creativity.

Another theme that you can find throughout this analysis is how Everton evidently targetted Kabak in their attacks. There were a number of aerial balls played down his channel where he did not look too solid and Richarlison breezed past him for both the opener and in the build-up to the penalty for the second. So, the Turkish defender had another poor match in Red following his nightmare against Leicester.

This win takes Everton level on points with Liverpool with a game in hand, so the Toffees will surely have half a mind on finishing ahead of their local rivals this season. A more pressing matter for them, though, should be the goal of European football, which should also be a worry for Liverpool following their fourth-consecutive league defeat – a phrase that has not been used in the context of the Reds since 1922.

Merseyside is Blue for now, but what will it be at the end of the season? 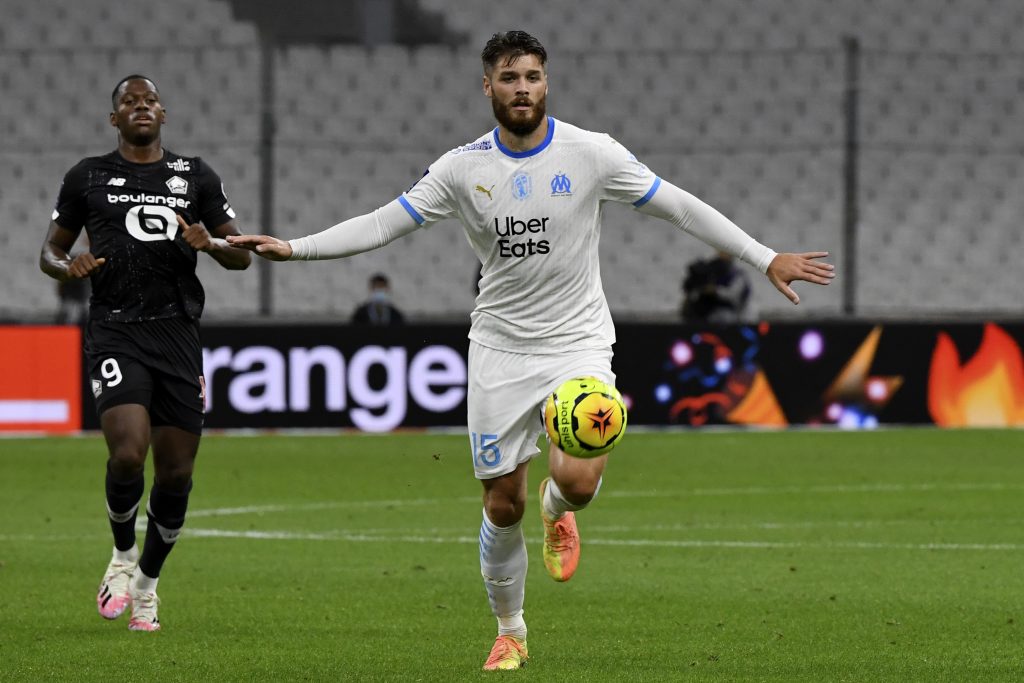 Where to find Sampdoria vs. Inter Milan on TV and streaming – World Soccer Talk