After watching Liverpool lose yet again to Leicester City, Manchester City took on Tottenham Hotspur on the back of an English top-flight record winning-streak spanning 15 games. The last side to beat Pep Guardiola’s rampant side were indeed Tottenham, but this was a completely different affair with both sides on opposite ends of the form table.

The result was completely different from the reverse fixture too, as Manchester City emerged deserved 3-0 winners after another brilliant performance. In this analysis, we will attempt to dissect all of the tactical nuances on display in this match. 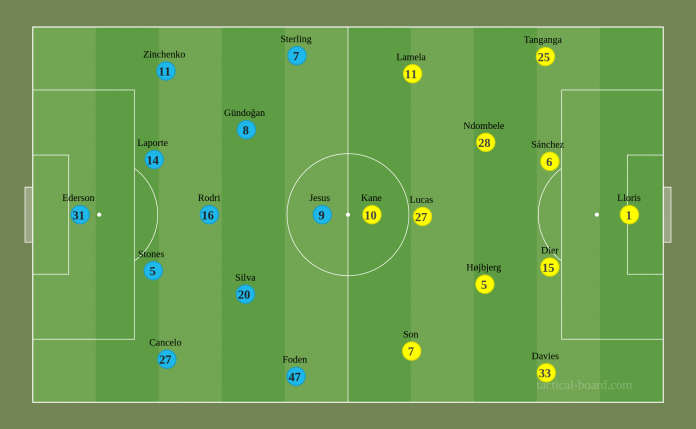 Manchester City lined up in their favoured 4-3-3, with Ederson shielded by a back-four of João Cancelo, John Stones, Aymeric Laporte and Oleksandr Zinchenko as Rúben Dias only made the bench. Bernardo Silva, Rodri and İlkay Gündoğan made up the midfield, with Phil Foden and Raheem Sterling on the right and left respectively. Gabriel Jesus led the attack.

Tottenham Hotspur came out in a 4-2-3-1, as Japhet Tanganga made his first league start in about a year alongside Davinson Sánchez, Eric Dier and Ben Davies in the back-four in front of Hugo Lloris. Tanguy Ndombele partnered Pierre-Emile Højbjerg in holding midfield, while Lucas Moura was in front of them. Erik Lamela and Son Heung-min were on either flank, as Harry Kane was the sole striker again.

With over 60% of the ball, Manchester City found themselves building out from the back quite often against a non-pressing Tottenham. Here is how they did it. 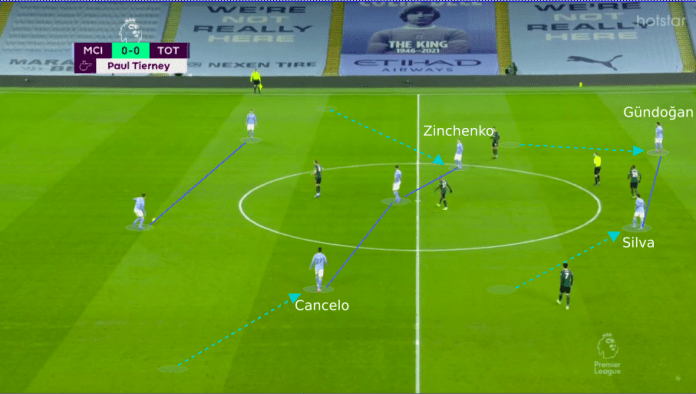 There was a sweet throwback to the Centurion days of 2017/18, as Guardiola used double inverted full-backs once again. Therefore, both Cancelo and Zinchenko moved into midfield in possession alongside Rodri, while Silva and Gündoğan moved forwards. 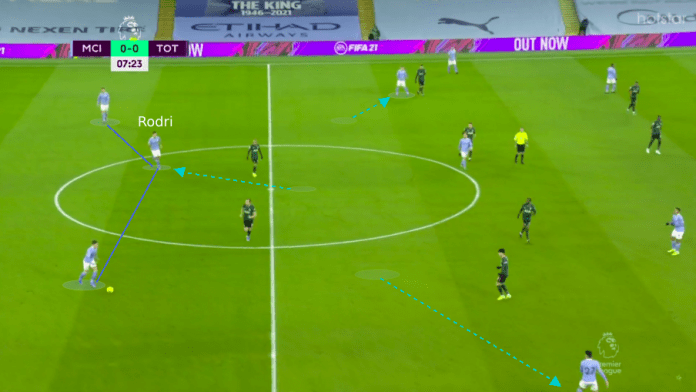 At times, Rodri dropped in between the centre-backs to form a back-three. When he did so, the full-backs held their width. 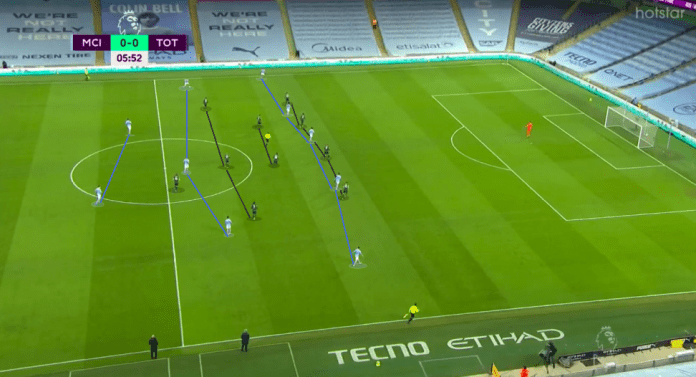 This aerial shot does a great job of depicting City’s shape in possession – a 2-3-5. It also shows Tottenham’s defensive 4-2-3-1 (although they often dropped into a 4-4-2) quite well.

Moving on, here is what City did further up the pitch.

As City got further forward, they started mixing things up in attack to stretch the Spurs defence, and they were quite successful too. 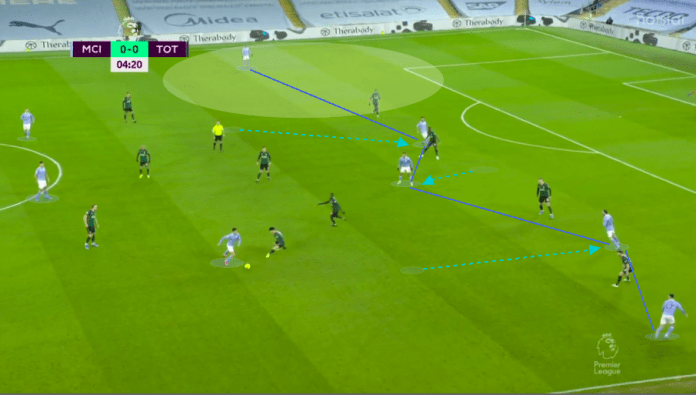 As aforementioned, City’s shape morphed into a 2-3-5 when they entered the progression phase and beyond, with the two midfielders going all the way forward. Jesus dropped deep to try and create space in behind and facilitate the midfielders moving forward. In this way, City had a front-five facing Spurs’ back-four, so they always had a free man in attack. In this case, it is Sterling on the left wing. 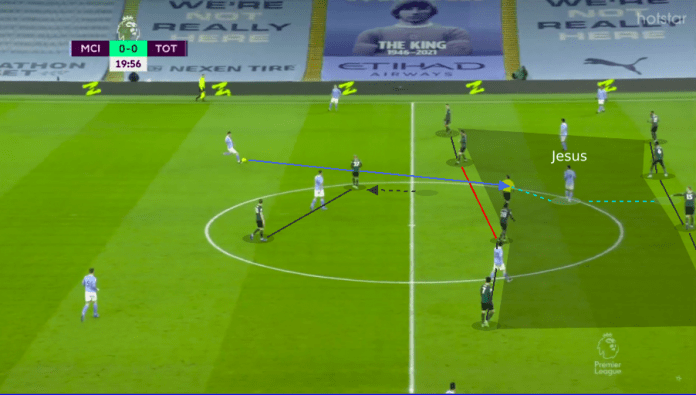 This sort of position was particularly useful when Tottenham switched to a 4-4-2 because this shape would have a greater gap in midfield, making it easy for Jesus to drop into a false-nine position to receive a pass and get in between the Spurs lines. The attack started by the pass above led to City’s first goal through a penalty. 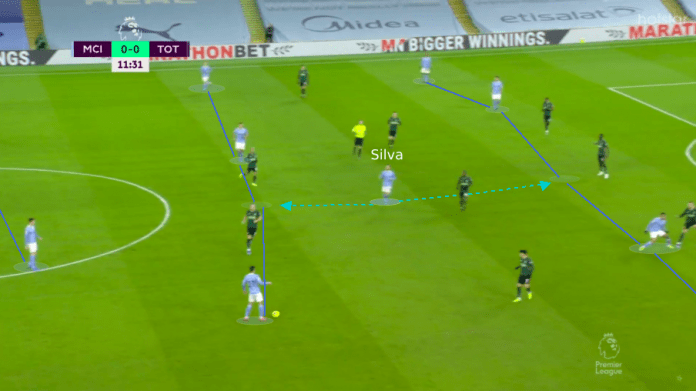 In other cases, Silva who took up this position, with Jesus to his right and Gündoğan to his left. He alternated between the midfield and frontline, so City’s shape in possession could be more accurately described as a 2-3-1-4. 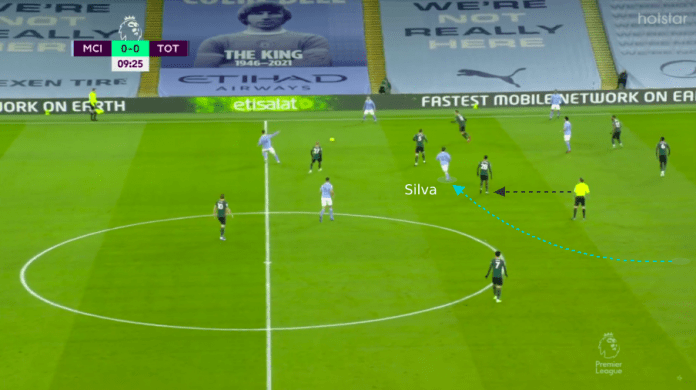 Silva had full positional freedom in midfield too, so he often dropped deep or moved to one side to create or access space. Here, you can see that with Silva drifting to the left, there are six Tottenham players on the flank. 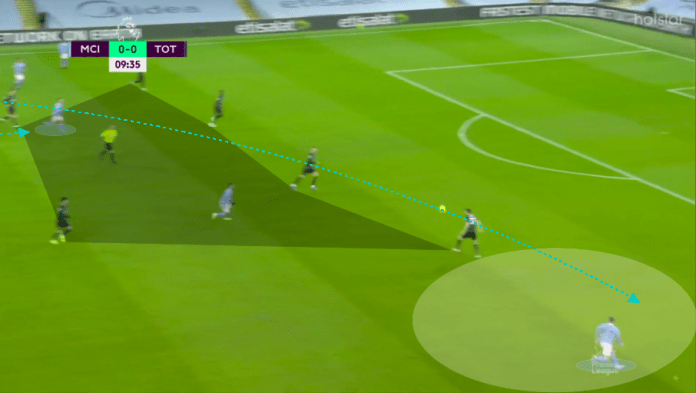 This enabled Zinchenko to find Foden in space with a crossfield ball, and the young Englishman had a healthy amount of space. Further, Silva’s movement backwards also opened up a decent gap between Tottenham’s midfield and defence, which he is looking to use here. 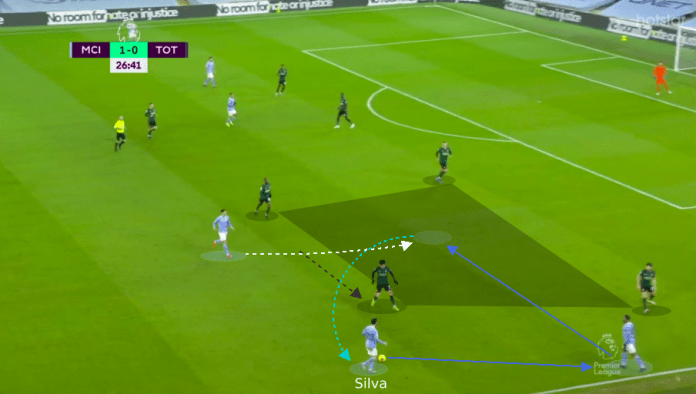 At times, Silva even turned up in the right-back position, creating a big gap between the lines on the Tottenham left. Over there, his aim was to drag Son away from Cancelo, freeing up the full-back to push forward and access the space he vacated. 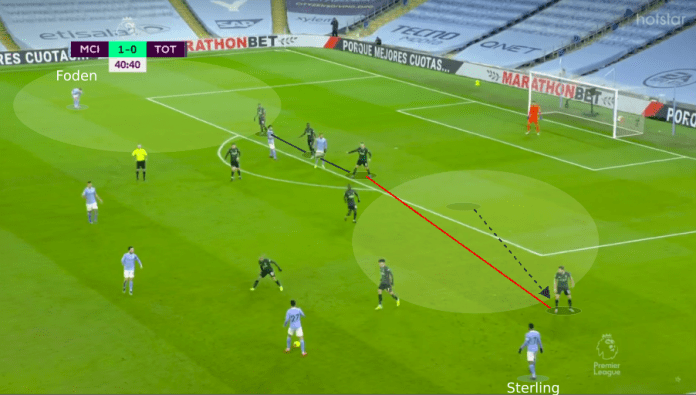 After taking the lead through Rodri’s penalty, City’s wingers swapped sides, with Foden going to the left and Sterling coming to the right. This was done to stretch Tottenham’s defence even further, as the wingers would naturally hold their width being left-footed and right-footed respectively. 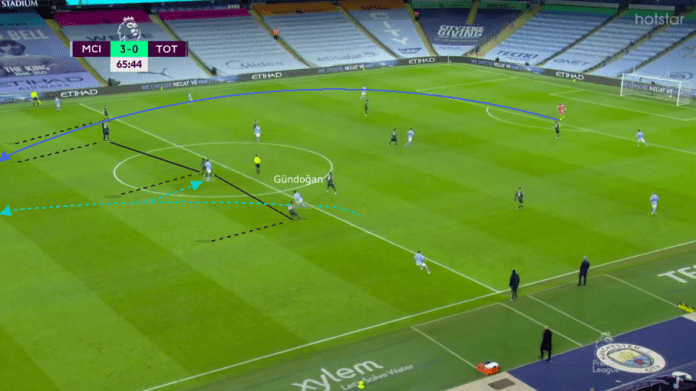 Gündoğan was pretty much operating as a second striker in possession, and he worked brilliantly with Jesus. City’s third goal was quite a simple one – Jesus moving back lured the Tottenham defence to take their line higher, opening up space in behind for Gündoğan to run into. Of course, most goalkeepers might not have been able to play that pass, but Ederson is anything but normal.

To recap, here are Manchester City’s average positions from this match. 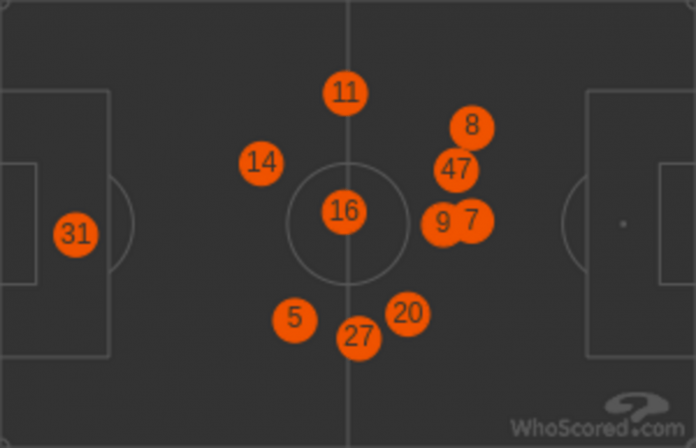 The first thing evident here is the double inverted full-backs (27 and 11) and the clear 2-3 at the back. City’s wingers (7 and 47) held their width in attack, but due to their stints on either flank, their average position is central, so ignore them. Silva (20) is the deepest in the front-five, while Gündoğan (8) is even slightly further ahead than Jesus (9) on the left.

Manchester City out of possession

When City lost the ball, they aimed to win it back immediately by pressing the ball. Here is how. 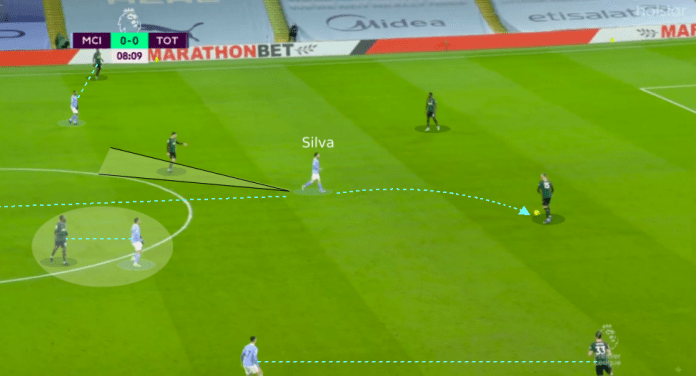 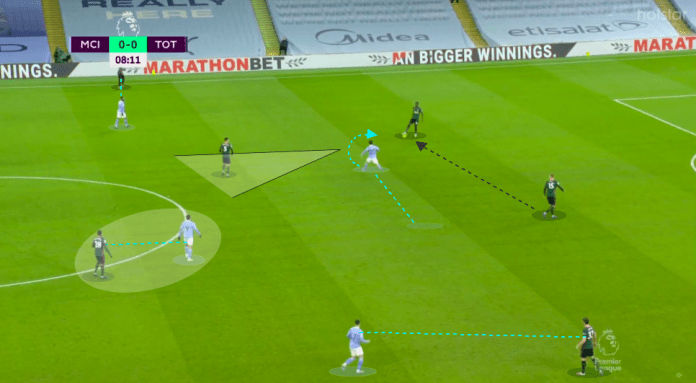 Silva pushed up from midfield to lead the press, as he hurried either centre-back on the ball while keeping Højbjerg in his cover shadow. Jesus sat in front of Ndombele, while the two wingers were positioned to press the full-backs if the ball was played out wide. 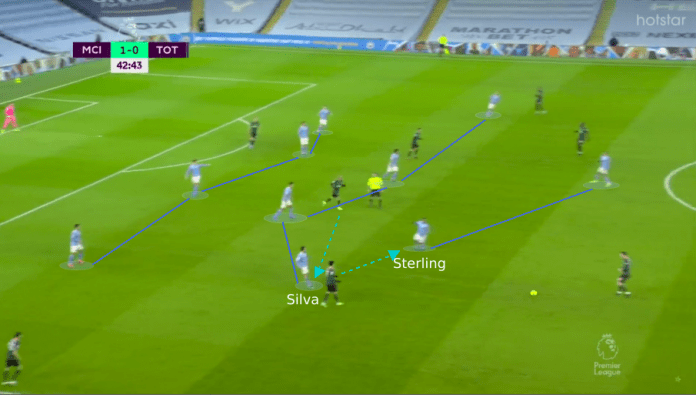 Further back, City defended in a 4-4-2, as Sterling pushed up to join Jesus up front, while Silva took his place on the right. 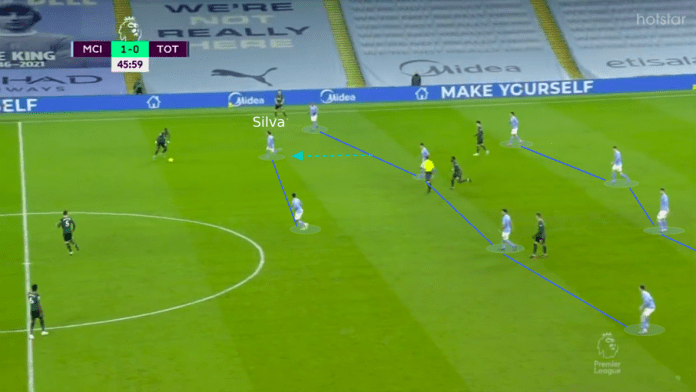 With a lead to protect in the second half, City did not continue pressing as high as they did in the first half. Instead, they immediately dropped into a 4-4-2 with Silva joining Jesus, just as he had done against Liverpool.

Before we conclude, here’s a quick word on Tottenham’s attacking struggles. 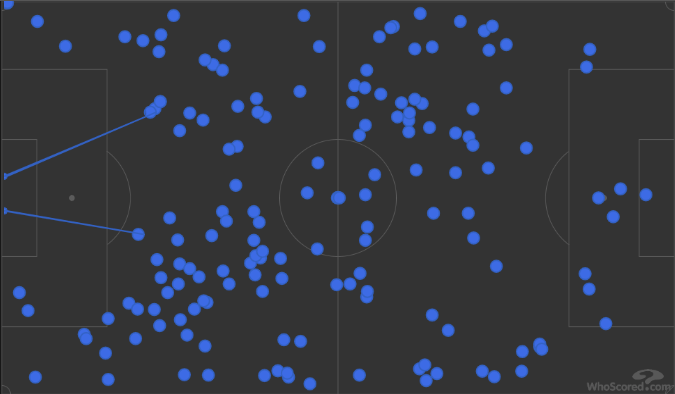 This is the combined touchmap of Lamela, Lucas, Son and Kane – their four main attackers. They racked up 161 touches altogether, but only managed two shots and as many touches inside the Manchester City box. Things were so bad that José Mourinho even brought Dele Alli off the bench, but nothing seemed to work.

Their simple problem was that they were just never afforded an opportunity to counterattack by a near-perfect Manchester City side, who deserve all the credit for this fantastic victory.

Less than three months ago, Tottenham rocked up to the Etihad Stadium and came away with a classic counterattacking 2-0 win, propelling themselves to the top of the Premier League table. But now, City bossed Mourinho’s men and established a seven-point lead at the top of the table, while Spurs are languishing in 9th after Aston Villa’s draw against Brighton & Hove Albion.

This performance and result just goes to show how far City have come since then, as they achieved this without their best midfielder (Kevin De Bruyne), best striker (Sergio Agüero) and easily their best defender this season (Rúben Dias). It’s scary to think what this side might be able to do with those three in the side, but the quadruple should certainly not be ruled out.

Coming back to the match, though, it’s hard to blame any of the Tottenham players for this performance. City were just too hot to handle, as everyone in blue shone. But, a special mention must go to Bernardo Silva, who was utterly outstanding in all aspects of his demanding role.

Guardiola’s men keep marching on, and they don’t seem to be in the mood of stopping anytime soon. 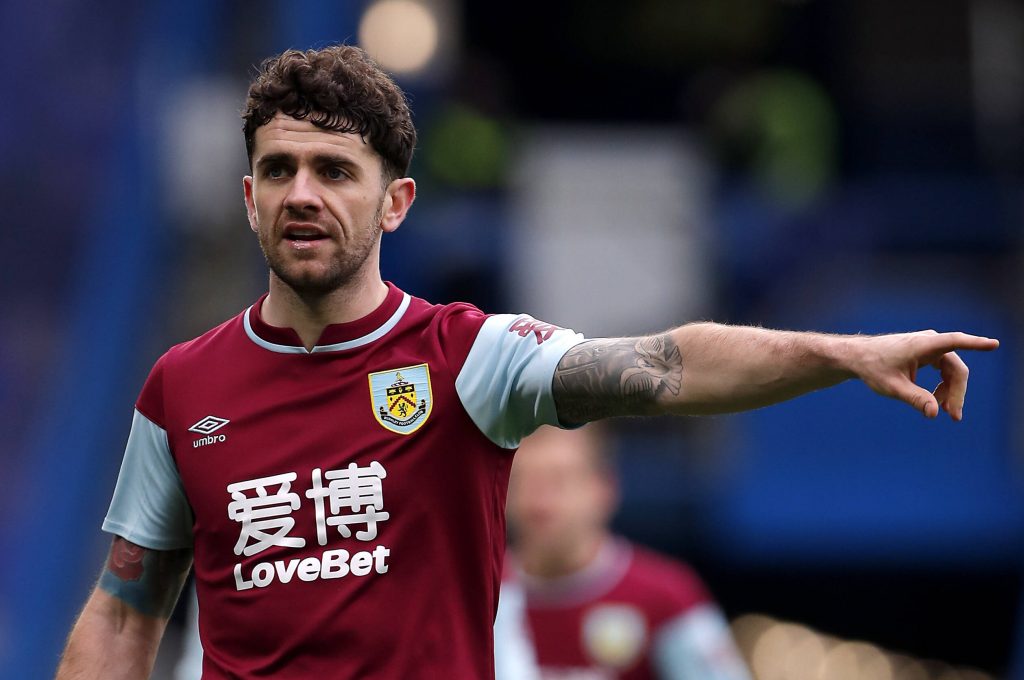