After that demoralising 1-4 reverse against Manchester City, Liverpool had another tough task on their hands as they took on high-flying Leicester City, who were three points and one spot above them in the table. The Reds’ title-hopes were already a distant memory in this rapid season, but they needed to win here to keep a spot in the top-four.

It was the Foxes, however, who emerged victorious thanks to a comeback with a late flurry of goals, denting Liverpool’s top-four hopes and boosting theirs. In this analysis, we will take a look at what went right – and wrong – for both sides. 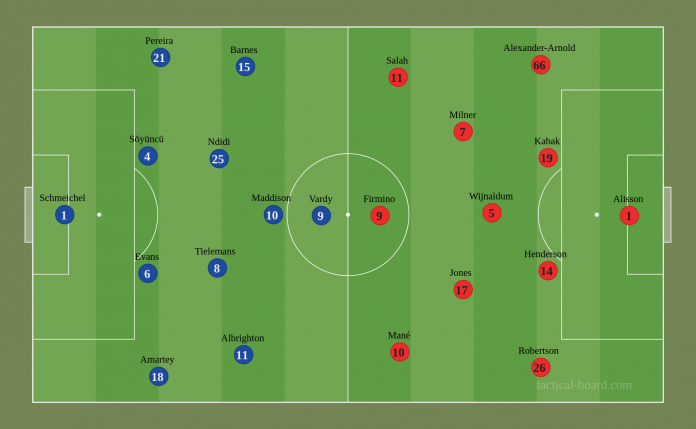 Leicester City lined up in a 4-4-1-1, with a necessary change in defence as James Justin had to miss out due to an ACL injury. So, Kasper Schmeichel had Daniel Amartey, Jonny Evans, Çağlar Söyüncü and Ricardo Pereira (who was playing at left-back for the first time in his Leicester career) in front of him. Wilfred Ndidi was joined by Youri Tielemansin midfield and James Maddison was just in front of them, while Marc Albrighton and Harvey Barnes were fielded on either flank. Making his first Premier League start after a groin operation, Jamie Vardy led the line.

Liverpool had to make a forced change in defence too, as Ozan Kabak was handed a debut in place of the injured Fabinho. Apart from that, Alisson, Trent Alexander-Arnold, Jordan Henderson and Andy Robertson all kept their places in the team, and as did Curtis Jones and Georginio Wijnaldum. The only other change, therefore, was in midfield, where James Milner came in to replace Thiago Alcântara, while the front-three of Mohamed Salah, Roberto Firmino and Sadio Mané continued in attack.

Brendan Rodgers’ Leicester City are a very tactically flexible side. They can play dominant possession-based football against sides which deploy a low block, but often use the trick themselves against such big opposition. 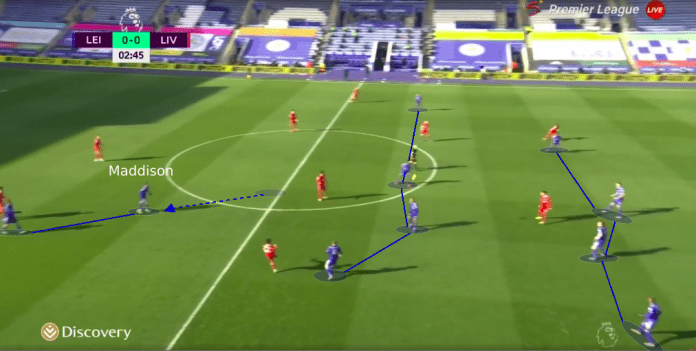 Leicester switched to a 4-4-2 in defence, as Maddison pushed forward to join Vardy up front. They sat back in their own half, but not in a completely low block to the edge of their box. You can see that below as well. 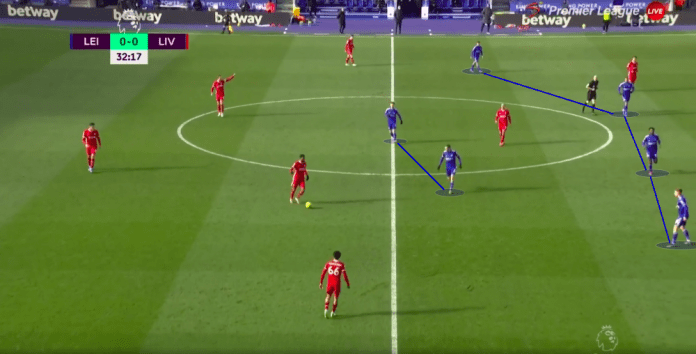 If the ball went out to either side, the corresponding winger pushed up to press, as you can see below. 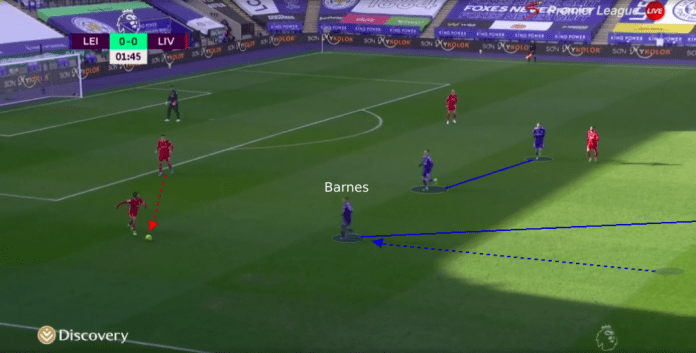 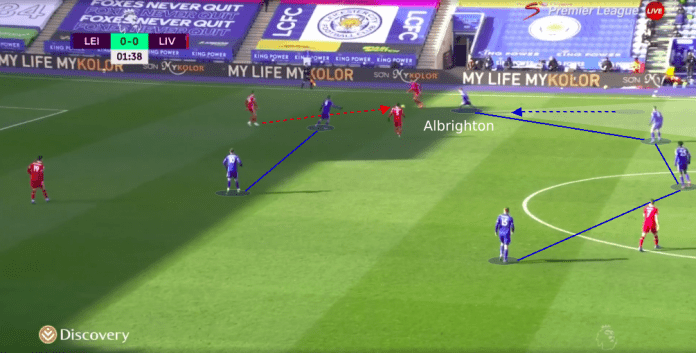 The motive here was not to win the ball back, but rather to prevent the Liverpool full-back from advancing or playing a through ball down the channel. Essentially, it was to force Liverpool to play through the middle. 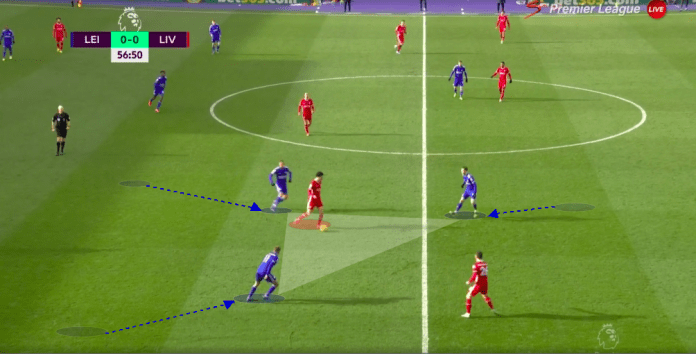 This is where Leicester’s decision to sit back would come into play. If Liverpool looked to play through the midfield, the Foxes would squeeze their lines to trap the player in possession, leaving only a way back to the defence.

Now, let’s see what Liverpool did when they were without the ball.

With Mané back from injury and fully fit following a week off after the Manchester City match, Liverpool started to press in a much more recognisable manner once again. 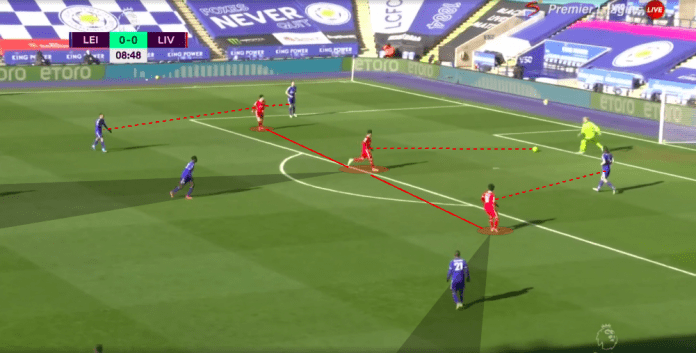 Because Leicester City sat so deep, they did not have too many men forward when they won the ball. But, as they pushed men forward, Liverpool pressed high as well, preventing the Foxes from passing around at the back. Therefore, they had to aimlessly punt the ball up the field very often, ceding possession in the process. This should explain why their back-five (including Schmeichel) completed only 16 out of 48 long balls. 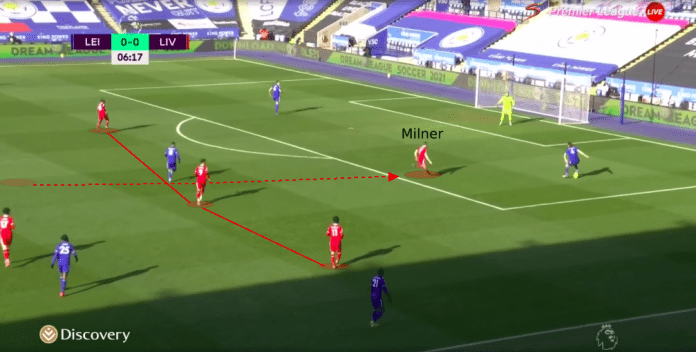 James Milner often pushed forward from midfield to aid the press, which is why there was a slight drop in intensity after he went off for Thiago.

With a PPDA of 7.57, Liverpool were clearly not messing about, and they got their just rewards for pressing as the opener came from such a situation.

But, for most (over 62%) of the match, Liverpool had the ball, so here is what they did with it: 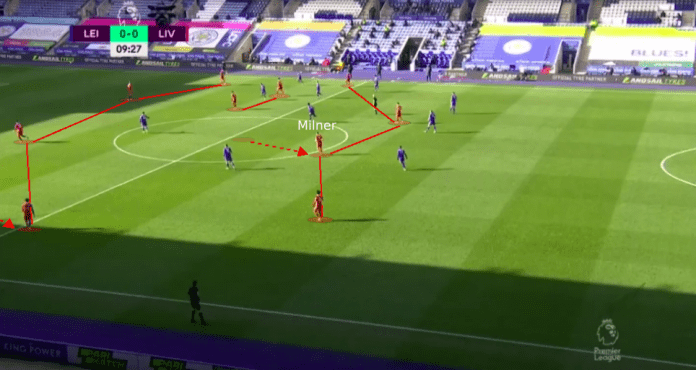 Liverpool played out from the back with from the left, usually, as Alexander-Arnold pushed further forward than Robertson. Jones and Wijnaldum helped progress the ball through the midfield, while Milner moved up alongside the front-three. 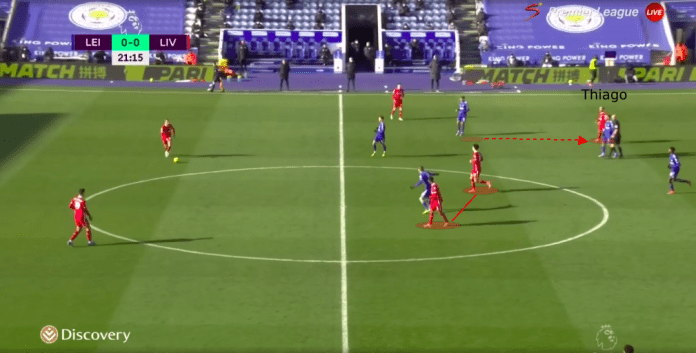 After Milner went off due to an injury, Thiago slotted right into his role in possession. However, as we all know by now, the Spaniard is not an attacking midfielder, which is why he was no good in that role. 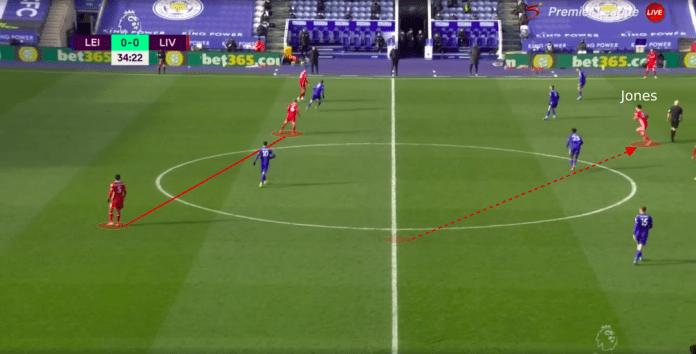 In a bid to solve this problem, Jones was sent forward with Thiago staying back instead. However, this too did not quite click for either player, who had a rather disappointing day.

On the flanks, Liverpool’s wingers had a field-day as they faced two makeshift full-backs, who they easily outpaced.

Mané was against Amartey, who is not even in Leicester’s top-four centre-backs’ list, let alone the foreign position of right-back. 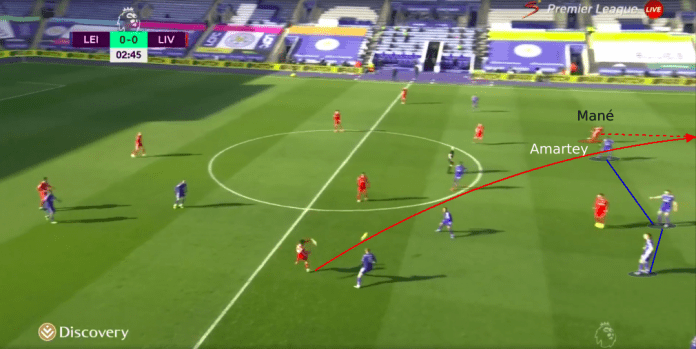 Pace is, of course, one of Mané’s strengths, and it also is one of Amartey’s weaknesses. Therefore, the Senegalese forward could easily run onto through balls even though he started well behind his opponent, as he did here. 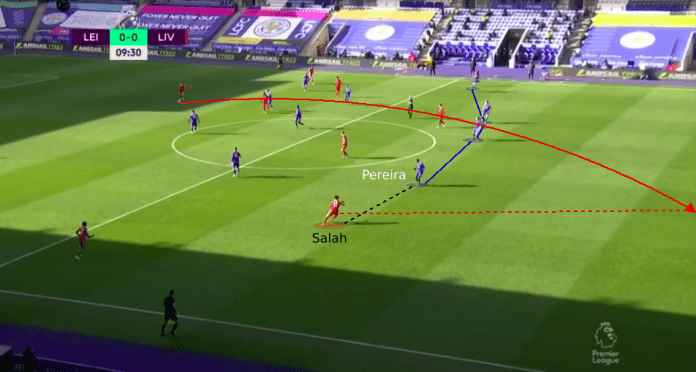 On the opposite flank, Salah had similar joy against Pereira, who was playing out of position at left-back. He too could use his pace to attack the Portuguese defender, whose positioning was not perfect given his unfamiliarity with his surroundings. 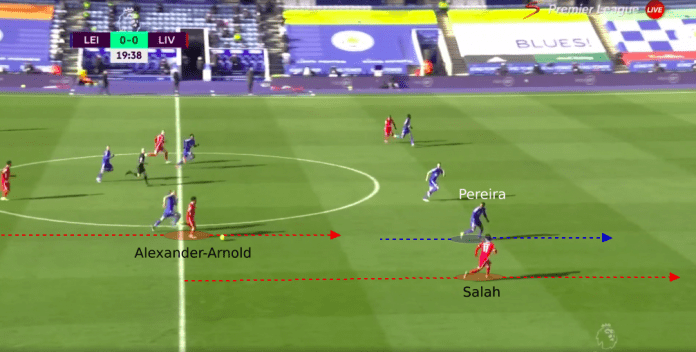 Things got even worse for Pereira when Alexander-Arnold bombed forward because Barnes usually failed to track him back, leaving the Portuguese defender in a 2v1 situation.

As aforementioned, Liverpool could not play through the midfield, therefore such long balls were their best outlet for creating chances, and on another day, they might have worked.

Liverpool tried out their 13th centre-back pairing of the season in this match, as Kabak made his debut alongside a midfielder in Henderson. Therefore, their defence could not be considered particularly strong, and here is how Leicester City tried to exploit it: 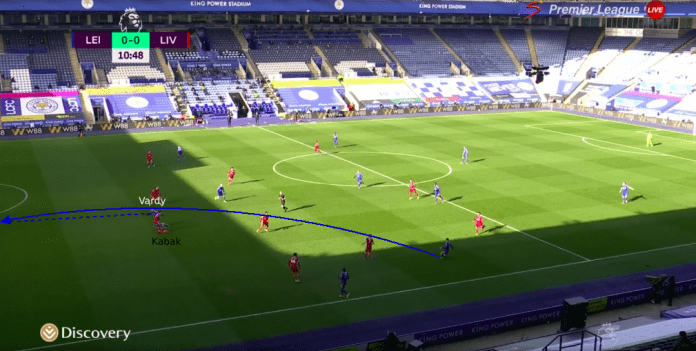 The left half-space is Vardy’s favourite region to run into, and he was given bonus incentive to do so in this case as Kabak was making his debut there, and he got little help from Alexander-Arnold. Here, you can see the English striker using his pace to meet an aerial pass in behind the Schalke loanee. 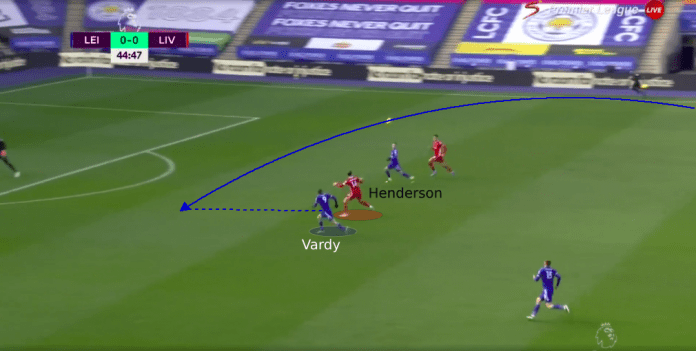 Here is another instance where Jamie Vardy is running in behind the Liverpool defence using the left half-space. Once again, Alexander-Arnold is nowhere to be seen, while the two centre-backs being switched surely did not help either.

After conceding an equaliser through a set-piece (on their right again), Liverpool went behind following some terrible defensive errors. 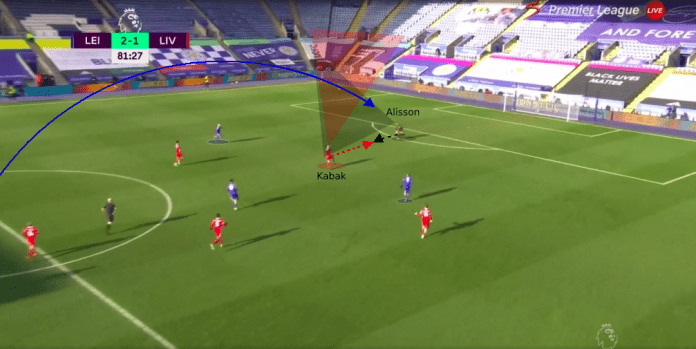 Once again, it was Kabak’s area which was being attacked by this aerial ball. In this frame, you can clearly see that Kabak is looking at the ball and has no idea about Alisson, while the keeper is rushing out and should know of the whereabouts of his central defender. The two collide, leaving who else but Jamie Vardy to walk the ball into an empty net.

The third goal came from this region too. 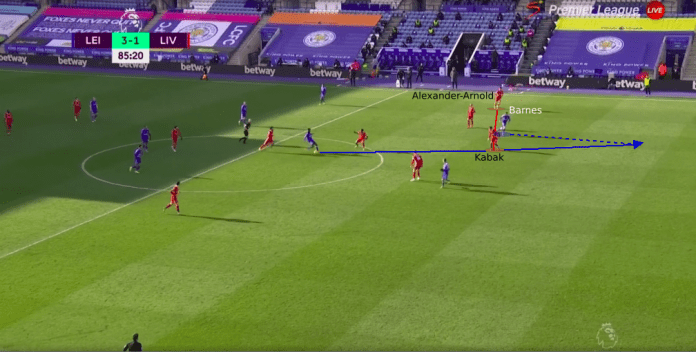 It was Barnes exploiting the space this time, which was created by Alexander-Arnold getting caught out of position. He had the pace on Kabak, so he could glide into a one-on-one situation and slot past the keeper to make it 3-1.

Therefore, Leicester had a great time attacking Kabak in the Liverpool defence, who clearly had a debut to forget.

Although Liverpool did not look particularly shabby for most of the match, they ended up losing comprehensively just as they did against Manchester City. The loss of Milner early on was undoubtedly a tactical hit, which was worsened as Thiago could not fulfil the Englishman’s role properly. Even then, the Reds managed to take the lead in the second half, but yet more poor individual errors (Alisson with the biggest one again) cost Jürgen Klopp’s men dear.

As for Leicester City, they are now six points clear of Liverpool in the runners-up spot at the time of writing, so they should surely look to hold on to a Champions League spot this year. 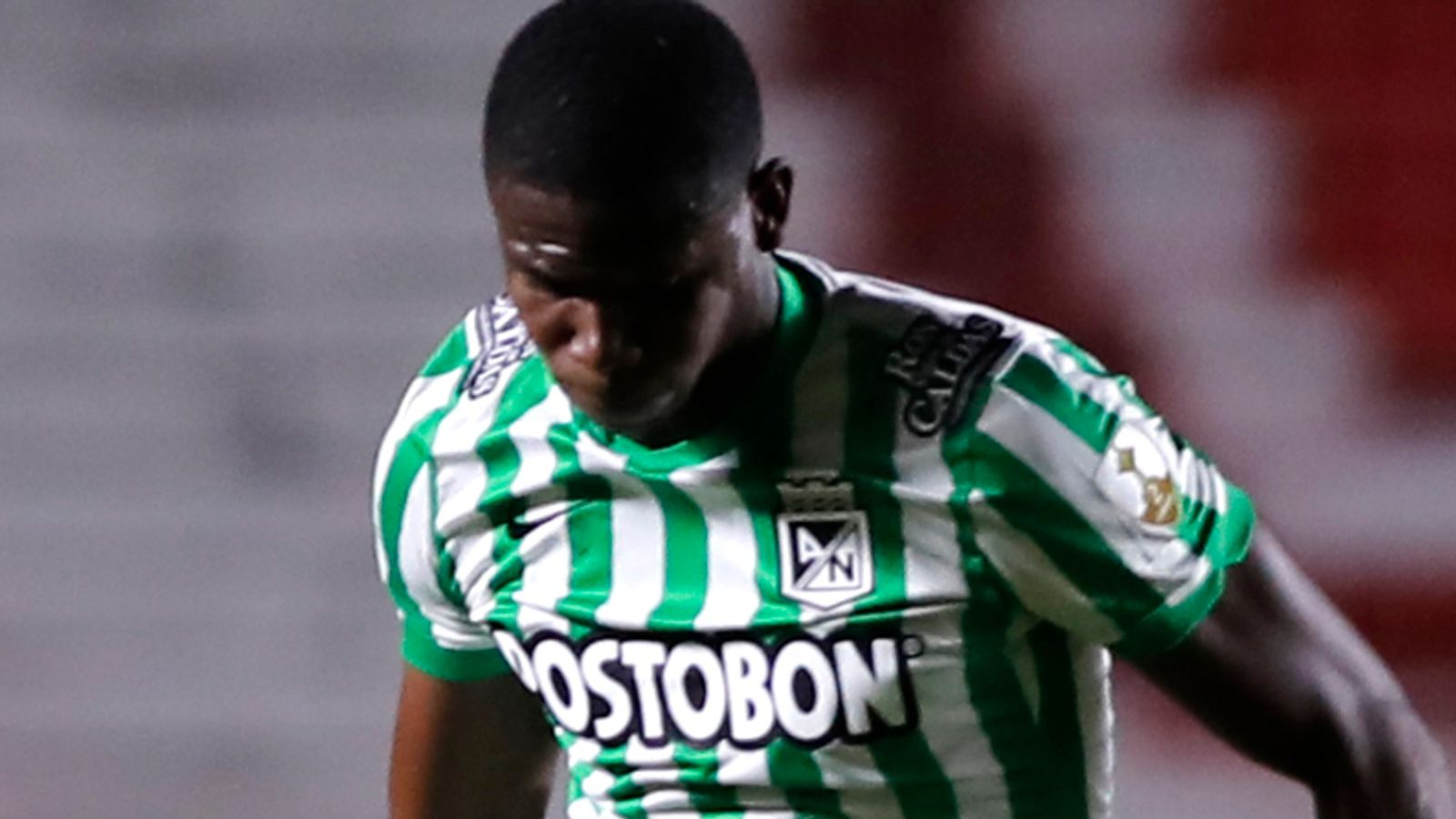