“I’ve got new darts, I’ve got a new attitude going into this year. I’ve been practising more than I’ve ever practised and I just can’t wait to get back,” claims Nathan Aspinall, who is raring to go ahead of what he describes as a defining year in his darting career.

‘The Asp’ has enjoyed a stunning ascent up the darting pyramid since his emergence at the 2019 World Championship and he began the new season at a career-high of fifth on the PDC Order of Merit.

The 29-year-old has remained on an upward trajectory over the last 18 months with virtually no prize money to defend on the two-year rolling Order of Merit, although that luxury is no longer afforded to him.

Fresh from reaching the semi-finals on his Alexandra Palace debut, Aspinall lifted his first major PDC title with a fairy-tale triumph at the 2019 UK Open, defeating Rob Cross in the tournament’s showpiece.

Nevertheless, ahead of the latest edition of this year’s ‘FA Cup of Darts’, Aspinall is defending the £100,000 he scooped for his Minehead success, and he is all too aware that an early exit could see him relinquish his top 10 status.

“This is probably the biggest year of my career,” Aspinall told the Darts Show podcast. “I’ve had a little taste at defending money with regards to the Worlds this year. It went really well that!

“I’m aware that I’ve got quite a lot of money to defend this year but likewise, around the area where I’m at in the rankings, there are a lot of people [defending money].

Glen [Durrant] has got basically all of his money to defend this year, Rob [Cross] has, Smithy [Michael Smith] has, so there are other people in the same position as me. 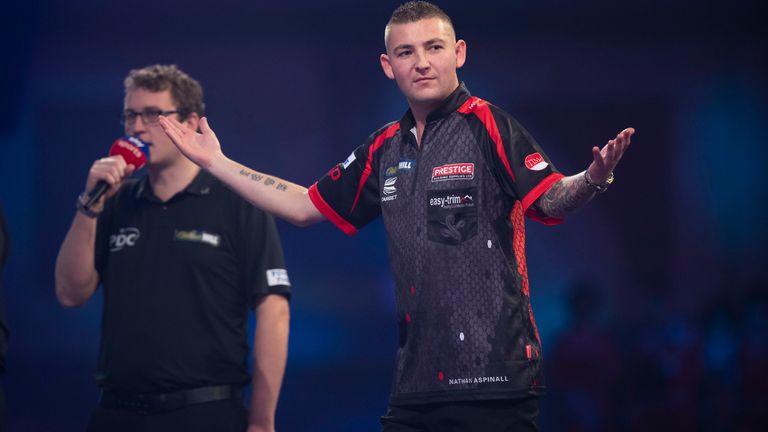 “I expected better from myself, but it’s been publicly noted that I really struggled to get used to playing without the crowd.”

Aspinall on his struggles without supporters…

“I think the only difference is mine is the first TV major of the year that I’m defending, but I think if you start looking to that, problems are going to start coming and you’re going to be putting too much pressure on yourself.

“I’ll just treat it like another tournament and as long as I win it, nothing happens, does it? I will stay where I am.”

As Aspinall referenced with his earlier quip, he had his first experience of defending sizeable prize money at the recent World Championship, only to suffer a third-round exit against a resurgent Vincent van der Voort.

The Stockport star will be hoping for better fortune when he begins his bid for a second UK Open crown in Milton Keynes on Friday, although he’s in a philosophical mood ahead of what promises to be a crucial period.

“We sat down me and my manager at the back end of last week, and basically he looks at all this stuff [rankings],” he added.

Aspinall sealed UK Open glory with a sensational 170 checkout against Rob Cross in the 2019 final. Colin Lloyd is the only other player in PDC history to win a major title with the maximum 170 outshot, having reeled in the ‘big fish’ to beat John Part in the 2005 World Matchplay.

“I try to not look at it as much, but you look at the year I’m defending; my biggest money is coming off in this first two months.

“I had the UK Open win and I think I got four quarter-finals on the bounce on the European Tour so that’s another £20,000. Effectively it’s the month of March and early April where I’ve got £120,000 to defend.

“I think you have to look at the bigger picture as opposed to: ‘Oh dear, if I have a bad tournament I’m going to go down to 11th.’ You don’t want panic stations to set in. That’s my mindset going into it.”

It is a mindset that has served Aspinall well throughout his meteoric rise. In the latter stages of 2018, he was languishing outside the world’s top 70, yet now he’s preparing to feature in a second consecutive Premier League campaign.

The former US Masters winner performed magnificently on debut last year, defeating the world’s top trio of Michael van Gerwen, Peter Wright and Gerwyn Price before losing to Glen Durrant in the final, despite doing the double over ‘Duzza’ in the league phase.

However, Aspinall insists he was fearful of being left out of this year’s extravaganza following an underwhelming end to his 2020 season.

“I think if I hadn’t got to the final, I don’t think I would have got in it. People may disagree but I didn’t have the greatest of years,” continued ‘The Asp’.

“I expected better from myself, but it’s been publicly noted that I really struggled to get used to playing without the crowd.

“It is something that I am trying to work on, but to find out I was in it [Premier League], I was buzzing. I’m gutted it’s not going to be in the arenas, at least the first bit, because until you’ve experienced that, you cannot explain it.

“Walking out in front of 9,000 people in Aberdeen; it’s just an unreal feeling. Hopefully I get through the first phase and hopefully come the second phase, we might actually have a crowd and a taste of what the Premier League is all about.”

Aspinall’s disappointment at his exploits in 2020 are testament to the standards he has maintained since his breakthrough, but his form admittedly dipped following a dramatic Premier League climax.

The former World Youth finalist only made one ranking quarter-final from the last five televised events in 2020, although he has made an encouraging start to the new season, registering back-to-back semi-final appearances at the Super Series.

He will also be buoyed by the prospect of crowds returning in some capacity during the summer, and he revealed that the ‘adrenaline’ of performing in front of the darting public has been instrumental in his rise.

“A line that always sticks with me – I had only just won my Tour card and I was in Dublin. I think Barry Hearn flew in on his private jet to have a meeting with us, and he was saying: ‘What a fantastic year; you’re sportsmen, but first and foremost you are entertainers.

Stay up-to-date with the latest news from around the darting world.

“That is the line that has always stuck with me. Okay I want to win, I’m a sportsman, but they are paying the money. I want to entertain as much as I can.

“I think that’s why I’m quite a popular dart player, because if I lose, I lose a game of darts, but I want to try and entertain the crowd and when I’m happy and bubbly, I’m full of adrenaline and the crowd are cheering my name, that is when I play my best stuff.

“I have definitely missed them, but fingers crossed it won’t be for too much longer.”

Watch live coverage of the 2021 Premier League on Sky Sports – the action gets underway on Monday April 5 with five consecutive nights of action from the Marshall Arena, Milton Keynes.