It was already an unfortunate Friday for the Toronto Blue Jays, as news came down that Tyler Chatwood was headed to the 10-day injured list with right triceps inflammation, while Teoscar Hernandez and Ryan Borucki were being placed on the COVID-19 related injured list. Then the game began.

Just two innings in, the Blue Jays were already down four — on their way to a 7-1 defeat to the Los Angeles Angels — when they had to make an injury replacement, as Lourdes Gurriel Jr. exited the game with what the club described as “COVID-19 vaccine-related symptoms” after he became nauseous between innings and vomited in a dugout washroom.

“I mean, I wasn’t expecting this,” Blue Jays manager Charlie Montoyo said before the game when asked if he’d anticipated so much early-season adversity and roster maneuvering. “But that’s just part of 2021. A lot of teams are going through things like this right now.”

That’s true — this is pandemic baseball. And ramping-back-up-to-162-after-playing-only-60 baseball, too. Stuff’s going to happen. But an awful lot of stuff’s happening for the Blue Jays. And the fact it’s all happening as the club gets used to its temporary, minor-league home ballpark in a sleepy waterfront town of 35,000 — imagine if a pro sports franchise set up shop in Orillia, Ont. — while playing 16 games in 16 days, battling through a nearly team-wide offensive funk and attempting not to over-work its already razor-thin pitching depth, falls somewhere considerably south of ideal.

Let’s start with Hernandez, because his situation is the most delicate. According to the club, the outfielder was exposed to an individual outside the team who tested positive for COVID-19. In announcing the news prior to Friday’s game, Montoyo declined to say whether Hernandez had been tested himself for privacy reasons, offering only that “we’re doing contact tracing and testing based on the MLB guidelines.”

Per MLB’s 2021 Operations Manual, any player determined to have come into close contact with an individual who has tested positive for COVID-19 is subject to a mandatory, minimum seven-day quarantine. Following that, the player must test negative for COVID-19 via a PCR diagnostic test conducted no earlier than Day 5 of their quarantine, be completely asymptomatic and receive written approval from MLB’s Joint COVID-19 Health & Safety Committee in order to return to club facilities.

Assuming Hernandez began his quarantine on Friday, he’ll be out of action through Thursday, April 15 at least. That’s the day the club begins a four-game set with the Royals in Kansas City and just ahead of their first off day in more than two weeks on April 19.

Already without Springer for at least that stretch and quite possibly longer — “we’re taking it slowly with him,” Montoyo said of the centre fielder — the club’s outfield depth chart will be tested. And that was before Gurriel left Friday’s game.

You can expect to see plenty of Jonathan Davis in centre field, and occasional action in the corners for Josh Palacios, who made his MLB debut on Friday night after being called up to take Hernandez’s place on the roster. Montoyo says he likes Palacios most in right, but was impressed with what he showed in centre during spring training play and could use him there in a pinch if needed. The versatile Cavan Biggio is always an option to play some outfield innings, as well.

Meanwhile, Borucki joins Hernandez on the COVID-19 related injured list for a different reason, as he was experiencing tiredness and fever symptoms after receiving his COVID-19 vaccination shot on Thursday. According to the United States’ Centers for Disease Control and Prevention, those side effects are common and typically subside within a few days. The same applies for the nausea Gurriel was experiencing, although the club will wait to see how he’s feeling Saturday before deciding whether he’ll join Borucki on the COVID-19 related IL or not.

This scenario is exactly why the Blue Jays have been making COVID-19 vaccinations available to players in waves over the last several days. The last thing the club wants is to be without multiple regulars at once. Montoyo declined to provide an estimate of how many Blue Jays players have been vaccinated to this point, but confirmed that several have already been through the process.

Of course, there is some incentive for Blue Jays players and staff who are willing to be vaccinated to do so as soon as possible. Any MLB club that has 85 per cent or more of its “Tier 1 Individuals” — including players, coaches, on-field personnel and some front office members — fully vaccinated will have several of MLB’s health and safety protocols relaxed, eliminating the requirement for mask wearing and the use of wearable electronic devices for the purposes of contact tracing. Players would also regain access to some group recovery facilities and communal clubhouse video, which could provide a competitive advantage.

The Blue Jays will take any advantage they can get these days, as the club’s now lost four of five after a promising, season-opening series victory against the New York Yankees in the Bronx. The skid has been marked by a surprisingly misfiring offence, which has collectively — with the exception of Vladimir Guerrero Jr., who barrelled two more balls over 108-m.p.h. on Friday — struggled to hit its stride early in the season. Friday’s loss was yet another frustrating night for Blue Jays hitters, as Angels starter Andrew Heaney spun six innings of scoreless, three-hit ball, striking out nine.

“Yeah, we’re expanding. There’s no secret about that,” Montoyo said. “We’ve just got to relax a little bit and get good pitches. But that’s what we’re doing right now as a team. We’re expanding the zone a lot. And we’re paying the price.

“When the whole team struggles, as a hitter you feel more pressure. It feels like you’re the one who has to do it. And that’s how it feels right now. Everybody feels like they have to do more. We’ve got to get to a point where everybody relaxes and starts seeing better pitches and having better at-bats. It just hasn’t happened in the last couple of games.”

Meanwhile, right-handed reliever David Phelps opened the game for the Blue Jays, working around a two-out Mike Trout walk to get his three outs and allow T.J. Zeuch — a depth starter forced onto the roster due to Toronto’s vast injury troubles — to begin his night against the middle of the lineup in the second inning. Considering the thunder atop the Angels batting order and Zeuch’s propensity to pitch to contact, the strategy made sense.

But you still have to face the big bats at some point. And for Zeuch, that occasion came quickly, as the Angels loaded the bases in the second inning on a pair of soft infield singles and a two-out walk. Zeuch then got what should have been an inning-ending groundball from David Fletcher, but Bo Bichette bobbled it at short and couldn’t make an out at second. That brought up the world-destroying Shohei Ohtani, who essentially flicked his bat at a changeup on the outside black and sent it to the top of the right-centre field wall.

It was no accident when Ohtani crushed the first pitch he saw his next time up — a 91.6-m.p.h. Zeuch sinker on the plate — 422-feet into the dead-centre-field night. A Trout rocket to the wall and Jared Walsh bomb to right ended Zeuch’s outing with seven runs (three earned) in and only 10 outs recorded, as Montoyo was forced into an already thinned-out bullpen.

If there’s good news in any of this — all things being a matter of perspective — it’s that Borucki’s absence likely won’t be long. The COVID-19 related injured list isn’t governed by a time frame like the traditional 10- and 60-day ones. That means that once Borucki’s symptoms subside and he’s physically cleared to play, he can return to action immediately. It’s possible that happens as soon as this weekend. The same would apply to Gurriel, if he winds up on the COVID-19 related injured list himself.

Meanwhile, how much time Chatwood misses is anyone’s guess. He last pitched on Monday, facing five hitters in a scoreless outing against the Texas Rangers. Montoyo said the right-hander’s triceps injury developed over the ensuing days, and, when asked how long Chatwood’s expected to be sidelined, offered only that, “our hope is it’s not very long — but, we’ll see.”

By way of reinforcement, the Blue Jays recalled Joel Payamps and Ty Tice to give Montoyo a pair of right-handed options in his bullpen, both of which he utilized in mop-up relief on Friday. Considering the great uncertainty in Toronto’s rotation and the early-season workload the club’s relievers have already had to bear, it stands to reason that further roster churn at the back-end of the bullpen could be ahead. Left-handers Anthony Kay and Travis Bergen would be in the mix, seeing as they’re the only remaining feasible options — with apologies to the raw and erratic 21-year-old Elvis Luciano — on the 40-man roster.

It’s certainly been a lot for a pitching staff that wasn’t exactly loaded with proven, top-tier talent to begin the season. And it makes Ray’s impending return that much more paramount. The left-hander threw an extended live batting practice session on Wednesday followed by a bullpen Friday, which could line him up to pitch Monday when the Blue Jays open a three-game set with the Yankees. That alignment would provide the added benefit of pushing Hyun Jin Ryu’s next start back a day, as the club endeavours to manage his workload and keep its most indispensable player healthy.

Of course, there are two more games to get through before that, with Steven Matz scheduled to pitch Saturday and no starter yet named for Sunday’s series finale with the Angels. That would be Tanner Roark’s turn in the rotation, but he struggled greatly against the Texas Rangers in his season debut, and Montoyo has thus far refused to commit to whether the 34-year-old right-hander will make his next start or not.

“All we have right now is Matz [on Saturday,]” Montoyo said before Friday night’s defeat. “And then we’ll go from there.” 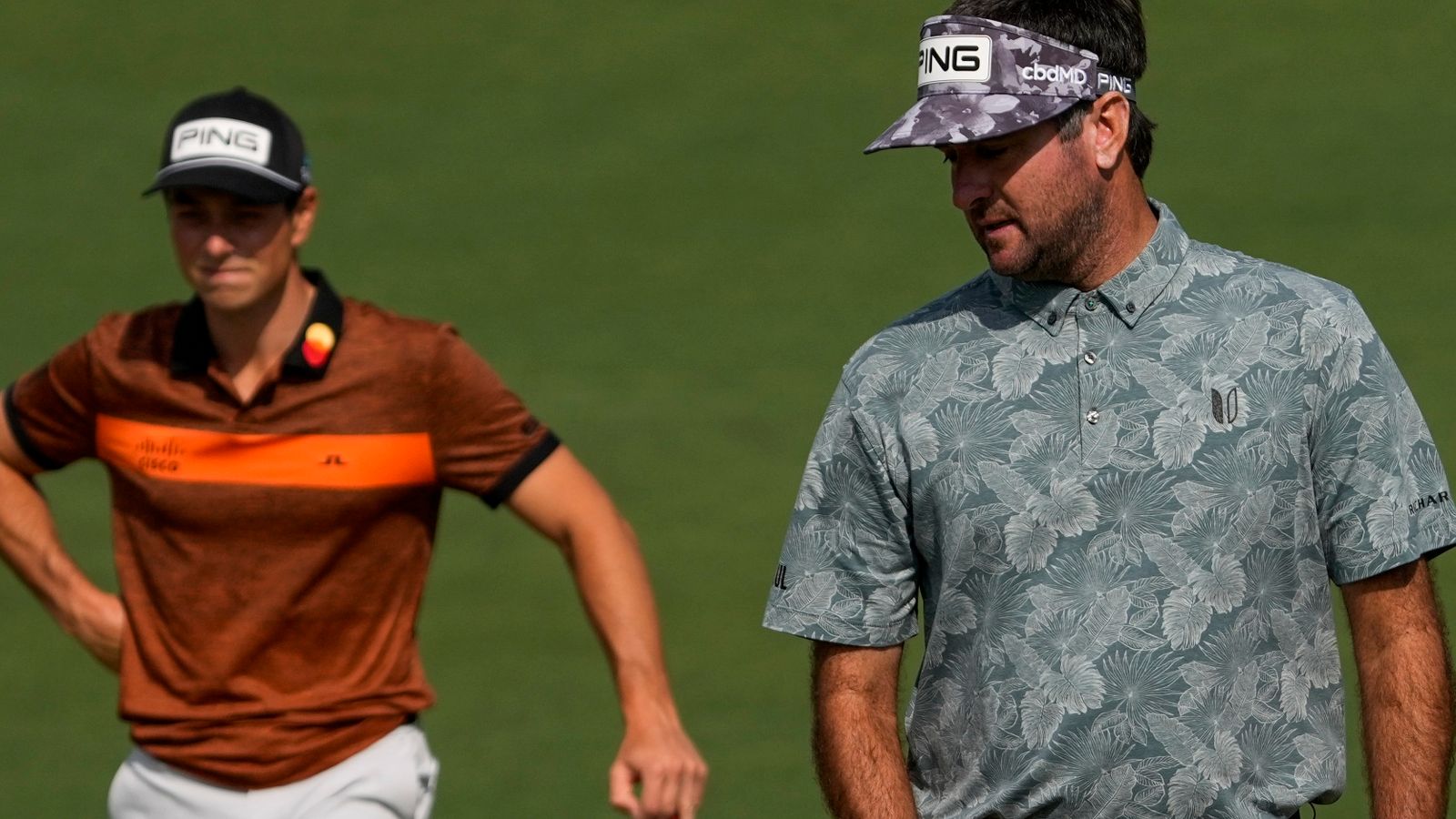 The Masters highlights: Top shots and mishaps from eventful first round at Augusta National 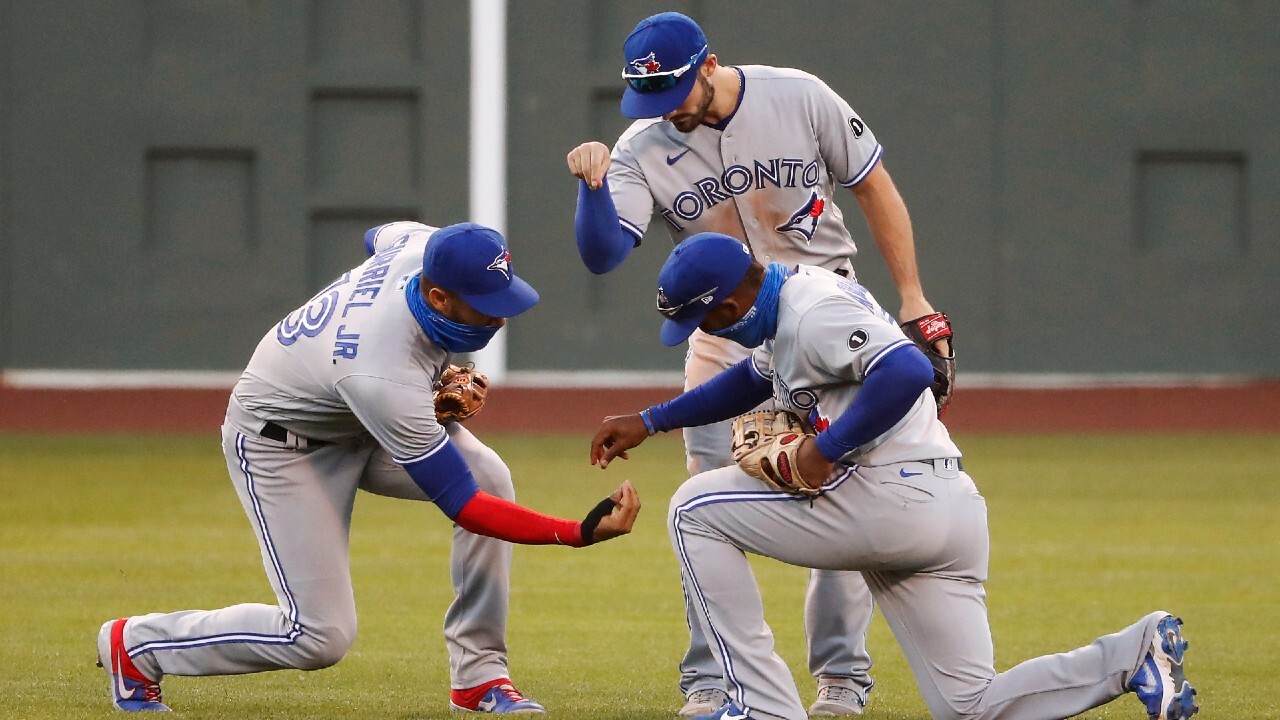